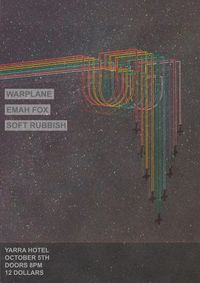 WARPLANE - Combine geometric guitar lines, propulsive drums, ghostly synths, subs that embrace or unsettle, and vocals that float like an ephemeral scent that you can’t quite place. It is a band forensically examining the less obvious choices. This is not pop music. Following up the release of the debut single 'Drift' in August, Warplane will be playing another headline set at the Yarra Hotel. https://www.youtube.com/watch?v=uLz10I5PTwE

SOFT RUBBISH- Is an angry fourway-post-psych-punk-pop band. Julie Montan, Joseph Foley, Renato Vacirca, Matthew Sincock are an internal scream externalised, a lament about planned obsolescence, our lost affinity with nature and a cry for justice and kindness in the golden age of advanced capitalism. categories